Second interview in Famous10 goes to Saso Dudic, rising star of Slovenian Tattoo scene. And not by coincidence. Together with Simona Borstnar (she will be featured in the next edition), they are the mastermind behind the tattoo Studio Tavci Tattoo (http://www.tavci-tattoo.si), creating amazing tattoos, that will leave you speechless. 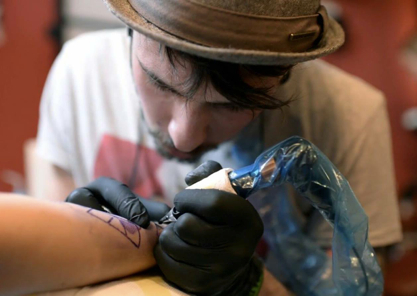 Here is a chance to get to know him better.

UranianWilly: If you weren’t a tattoo artist, what would you be and why?
Saso: Probably some sad tourist guide sick of stupid people. I am also trying to do my best as a band member and a part time actor. But I don’t think I would be able to do that as a full time job anyway.

UranianWilly: If I was to turn on your music player right now, what 3 artists/songs would I see on your recently played list?
Saso: Rise against, Pearl Jam, Mumford & Sons. 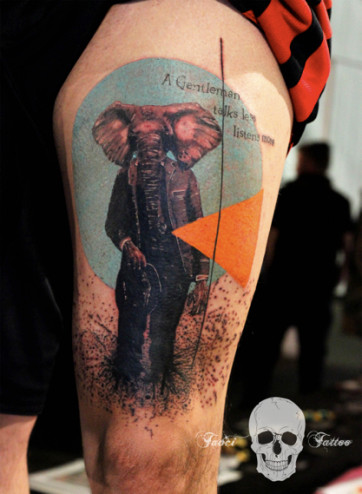 Saso: “The meaning behind this one is simple. Listen others! We are becoming robots and nobody listens anymore.”

UranianWilly: If you had a chance to bring one person back from the dead, who would it be and why?
Saso: Huh… that’s difficult question. I miss all that I have lost so far. I don’t want to do any injustice to anyone. My cat left me way too soon (fu***** tumour). And I miss my grandfather a lot! Then there’s my uncle, and a bunch of friends and mentors that have left me already. But if I had to choose one, I would probably bring back my neighbour. He passed away when he was only seven or something. So I think he deserves to live the most. And I think that anybody on the other side would oppose to that decision.

UranianWilly:  What is the most trouble you’ve ever gotten into and did you learn anything from it?
Saso: I am always in trouble. I can’t really say when I was in it the most but I can say that I always learn from my mistakes.

UranianWilly: What three things you regret not learning to do?
Saso: I don’t have that kind of regrets. If there’s something I would like to learn, I simply learn it. Okay, maybe some languages.

UranianWilly: What do you like most about tattoo art and tattooing?
Saso: Well, regarding the art itself, I like its tradition and all the meanings behind it. I love how you can use the body to make something that looks good on someone. To make them feel something and it lasts forever… well at least until our time comes.
And regarding tattooing, I love how I feel when I am doing it. I love how I tattoo all sorts of people and how I learn from them. I can literally say that I learn and grow everyday by tattooing. I really feel so grateful that I am able to do tattoos. The feeling I sometimes get when I am tattooing is so thrilling I can’t really explain with words. And I really don’t want to sound cheesy but I really am happy tattooing has become such a big part of my life. 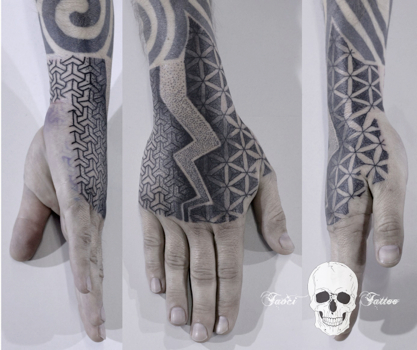 Saso: “I like this tattoo because it was done on a friend and it doesn’t have any special meaning. I like the outcome and the placement.”

UranianWilly: Do you believe there is intelligent life in the Universe?
Saso: I am too uneducated in this area to tell anything. But if I think about it just for a second, I would say yes, I do believe that there is. We are way too small and insignificant to be the only ones.

UranianWilly: What 3 adjectives would you use to describe your personality (even the weirdest or funny example)?
Saso: Industrious little fucker who doesn’t like people that mistreat animals! (Sorry I neglected the “3 adjectives” thing.)

UranianWilly: What’s your motto or the advice you live by?
Saso: I don’t think there is anything owed to us. You’ve got to go out and work hard for every round win!

UranianWilly: Ten years from now you will be where or what?
Saso: I really can’t say. I think it is arrogant to predict your future. I will certainly do my best to be better at what I do as I am today. I hope I will be smart enough that I will always learn new things and be so passionate about the things I love and do. I also hope my actions will affect the people. 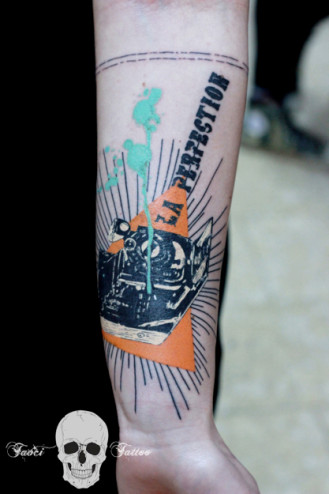 Saso: “Old camera tattoo as a perfection..because  for some people perfection can be seen trough camera lens.”