My fellow colleague Marko is not just a great photographer, he is also a very nice and humble guy. I still wish there were more people like him in the photopit. This is how he sees himself 🙂

“I’m a 26-year-old web designer & front-end developer by day and freelance music photographer by night. Hard work, positive attitude and a bit of luck helped me to find myself around some great artists in Slovenian music.”

1. If you weren’t doing what you are doing at the moment, what would you wish to do and why?
As a child, I always dreamt about becoming a professional athlete. Maybe long-distance runner, maybe cyclist. I ran my first half-marathon at 11 years old, the first marathon at 17 and things started looking pretty good. Not on a professional level, but I won some amateur local races. After being diagnosed with chronic Plantar fasciitis, I slowly drifted away from active recreation. If I had to choose something other then my current jobs, I’d probably find myself in sport. Not necessarily an athlete, maybe a coach. I don’t know.

2. If I was to turn on your music player right now, what 3 artists/songs would I see on your recently played list?
Well, my music player is almost always on and it’s currently playing Greta Van Fleet’s debut album From The Fires. Short history overview also reveals fresh album from a band called Alien Weaponry, titled Tū and Slovenian band Holder’s Daleč je sodni dan from 2009. I usually don’t listen to single songs as I like the flow of entire albums.

3. If you had a chance to bring one person back from the dead, who would it be and why?
Recently, I attended a memorial concert of Slovenian singer Katarina Avbar, who passed away way too early. She left behind a young daughter and partner, who happens to be a very good friend of mine. If I could bring anyone back, it would be her – without any second thoughts. 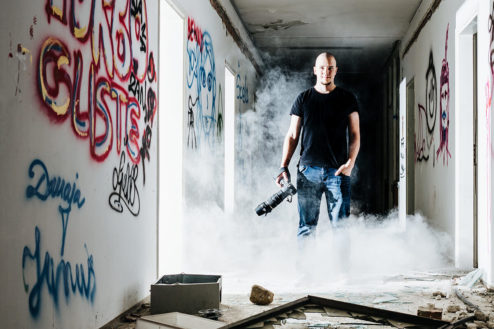 4. What is the most trouble you’ve ever gotten into and did you learn anything from it?
I wouldn’t say it was most trouble, but it was really uncomfortable. The first and only time I got fired from a job was when I worked as a student graphic designer for a well-known insurance company. After a few months of low paid work and repetitive tasks, I forgot to rename a batch of buttons, which were automatically exported with a script, which had a nasty curse word in it’s naming parameters. It was in-house file and one of the developers noticed the weird name – she called me and I explained to her that it was a mistake and it will never happen again. After two weeks I got called into the bosses office and learned that one of the board members learned about the event and demanded I was let go. Now I always carefully name the automated scripts, files, folders, spiders, cars …

5. What three things you regret not learning to do?
I like poker, but I never learned to play it properly. I’m bad at bluffing, I usually bet too high too early … Also German. I had German class in high school for 4 years and I hated it. I hated the long words, the sharpness of it and decided I’m not gonna learn it. I don’t know how I passed, because I can hardly form a basic sentence and I still hate it, but it would be useful to know the basics. The third thing would probably be some sort of martial arts. Let’s say kung fu :).

6. What do you like most about the work you are doing at the moment?
Since I started working as a music photographer, the greatest reward was getting to know amazing artists. Some of them became close friends and I’m sincerely grateful for that.

7. Do you believe there is intelligent life in the Universe?
Yes.

8. What 3 adjectives would you use to describe your personality (even the weirdest or funny example)?
Hard-working, passionate and tired.

9. What’s your motto or the advice you live by?
“Work until you no longer have to introduce yourself.” -Unknown

10. Ten years from now you will be where or what?
In the photo-pit, doing what I do best.

Thank you Marko and looking forward to all the amazing photos you will make and shared moments in the photo pit!